Do you see this photo? I hate it. And yet, I love it. Is that possible? I hate it because I feel as though I look as big as a house in the crinoline dress, I thought was so beautiful. My butt appears even more rotund than it is. Yet I also love it because it is a photo of me dancing to the special song my only son personally selected for his mother-son dance at his wedding. And yes, I was a blubbering idiot, crying the entire time on the shoulder of my handsome 27-year-old son. But I have to confess when I saw the photo for the first time my initial response was, “Ugh! That can’t go in his collection of wedding pictures to be remembered for all time.” Of course, I kept the thought to myself, as the day was, after all, about my son and his new bride and not about me.
However, it was after I made it home from that long, grueling 12-hour road trip and a whirlwind
weekend that I found out a dear friend of mine was under hospice’s care, and that’s when something
happened inside me that prompted this message.
My dear friend was only 63 years old when he died. He had been married to the love of his life for 45
years. I was blessed to know him for 10 of those. He had two children who often played with mine, and
our families shared many cookouts, parades, outdoor fun and laughs together. I was unable to make his
funeral service but sent a plant along with individual personal messages to each family member as they
were also my friends. The messages held prayers, thoughts, sentiments and condolences. Sparing the
long story, I’m sure you gather that my family was very close with his. But, through the distance, I do not
think they know the hurt I really felt at his loss. 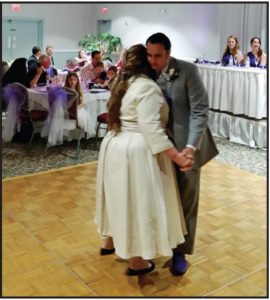 It wasn’t until his daughter posted on Facebook the 15-minute video that the funeral home had made of him and his life. The photo slideshow passed frame by frame of images from the young man working on his cars, fishing with friends, marrying his lovely bride, dancing in the kitchen with his little daughter, wrestling with his son and so much more. Some of the photos were old, tattered and faded. Some he looked like a movie star, very handsome with no shirt. I though, “hubba hubba!” I’d never seen him that way before. Other photos he looked as I remembered, smiling, a bit scruffy, with kind eyes. For 15 minutes I watched a man’s life pass me by in pictures and I realized that he had really lived and was really loved.
I’ve seen these types of videos before. In fact, I’ve made them. Carefully choosing the right song to
portray the personality. And yet, this one struck me for some reason. Perhaps it was the photographer in me now, or the freshness of my son’s wedding and our time together, watching these photos slide by one by one as songs were sung. It was then I realized, there was not a single “posed” picture in the bunch. All candid’s, all raw, all truly who he was. Shirtless, covered in mechanic’s grease, fish guts, cigarette hanging from his mouth, a child clinging to his leg, goofy personality shining through. It was who he was. Who he lived to become. It was rare and beautiful and I realized at that moment, especially
being a photographer, that I had often hidden behind the lens and as a mother spent the last 30 years or
so avoiding being in the picture or even accepting photos unless I look “just right.” It was while watching
that video that it came to me like a flood. What would my children do if they had to make a video of my
life? My memory? My legacy? Where are the pictures of my life? Especially of my life with my children. I
have lived quite the life. I’ve been blessed with quite the personality and yet stayed hidden due to pride
or vanity or some other silly reason.
Memories may stay in our minds, but the moments that get captured by the click of a button are frozen
in time. I encourage you to stop posing and stop worrying. I can assure you when I have left this earth, my son will remember our dance, and our conversation, but not the dress, and not the size of my rear
end. Embrace every moment and every dance. And remember, life is not posed.

© c. michelle bryant
(As previously published in Focus on Fabulous magazine- Summer 2016)
Michelle Bryant is an entrepreneur, nationally acclaimed award-winning artist, inspirational speaker,
self-published author of seven books available at most online retailers, a multi-award winning, published
photographer whose work is nationally used for worldwide marketing campaigns and featured on
various items including but not limited to apparel. She shines her light and speaks from her heart in an
encouraging and transparent manner and offers a message of hope, healing, and victory to any who
encounters her or her works. You can check out her multitude of works at: www.divinelyfocused.com.